Kaoru Uchiyama is jarig! He has reached the age of 91 on November 16th. He is in good health and still helping the foundation of S.O.O. (chairwoman Dr. Kaori Maekawa) which in 2012 took the lead in searching for Japanese fathers of Dutch children. Mr Uchiyama started his work after a meeting with JIN’s secretary in November 1995. Father Salemink, he and JIN developed in the first months of 1996 the framework for the handling of dozens of requests from JIN members. Last year in November 2013 he received a Letter of Gratitude from the Dutch Ambassador in Tokyo. During the war Mr Uchiyama was part of a military communications unit on Java. (He was never in Birma as is wrongly written in the book of Mrs Hamer that is translated in Japanese (Orareta Hana). See on this site the rectification. 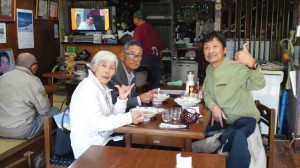 After the war he worked for the newspaper Yomiuri Shimbun.

In Sunada’s documentary shown on December 5th he can be seen talking about his activities for the Japanese-Dutch descendants.

In the picture his wife Nobuko san and son Akira san (architect). The picture is taken by the other son Shigeru (who owns a jazzclub in Tokyo) or his daughter Kumiko san (who is an English teacher). By the way Nobuko san was (or still is) a very good swimmer. Recently she made a bad fall but she has recovered well.